No Flash sales at this time. 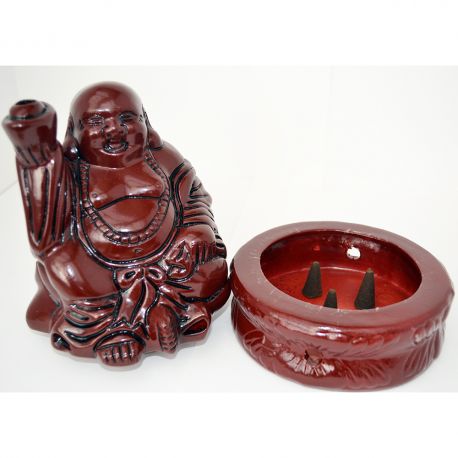 By buying this product you can collect up to 1 loyalty point. Your cart will total 1 point that can be converted into a voucher of 0,20 €.

Statue of chinese buddha (Pu-Tai) of prosperity made of terracotta with patina.

Pu-Tai, Bu-Dai (China) or Hotei (Japanese), literally a cloth bag or glutton, is more known under the name of Buddha inside. In China, Buddha is called the loving or friendly. It has been incorporated in the buddhist culture, and is revered as an eccentric chinese monk of the Chan sect. The image of the chinese Buddha graces many temples, restaurants, and amulets. Buddha has become a deity of contentment and abundance.
The theory was born in China in the Tenth century during the dynasty Liang wants that Buddha was a buddhist monk, considered as a man of character, good and affectionate.
Buddha is almost always depicted with a canvas bag, that can never be emptied, and which is filled with many precious items, such as harvested rice plants (symbolizing wealth), candy for children, food, and the suffering of the world. He is the Patron of the weak, the poor and children.
The statue of the Buddha and depicts a bald man corpulent and smiling, draped in a robe, with a belly widely exposed, symbolic of happiness, luck, and plenitude. The stomach is also considered the seat of the soul in chinese mythology and so the large stomach can be taken as an allegory to the Great Heart of Buddha. In some sculptures, the Buddha inside has small children at his feet. Another accessory, often this is a cup for alms, to represent its nature as a buddhist. All of these images show the Buddha as a monk wandering around and takes the sadness from people of this world.
Buddha Padma sitting on a lotus leaf.

No customer comments for the moment.